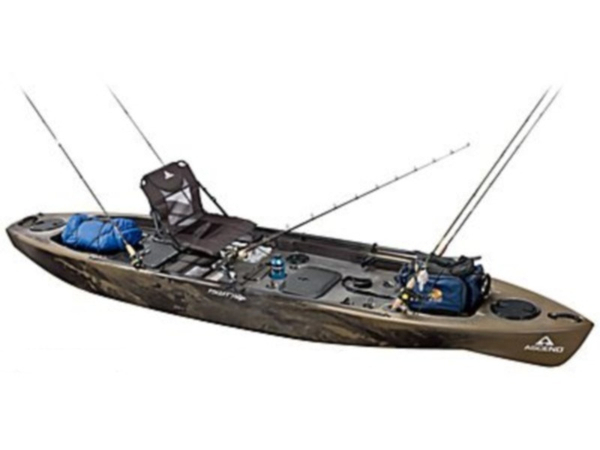 The Ascend FS128T is the Cadillac of fishing kayaks in the Ascend line. No feature has been missed on this fish-slaying boat.

The Ascend FS128T Fishing Kayak is the end-all be-all in the Ascend kayak angler line. This kayak comes equipped with every available feature in the Ascend line-up. It is the ultimate fishing kayak.

This kayak was designed from the ground-up with the fishermen in mind. The wide hull provides amazing stability, it is possible to walk around in this kayak. The boat tracks great in wind and waves, yet still is quick to reach speed when paddling. One of the innovative features of the FS128 is the casting-platform and stand-assist leash which allows you to stand and fish directly from the kayak.

The stainless-steel seat is fully adjustable with 3 different height options. The seat also swivels 360 degrees allowing you easy access to gear and the ability to follow your fish as you are fighting. The seat also removes and becomes on on-shore seat if so desired.

As you can see the seat sits high out of the water providing excellent visibility into the water below. The Ascend FS128 Fishing kayak includes 4 flush-mounted rod holders and 1 center-mounted fully adjustable rod handler.

The kayak includes a myraid of storage options. There are 3 waterproof deck hatches for storing dry gear. The stern of the boat includes a classic bungee-cord system for adding a cooler or other large items. The cockpit also includes a easy-to-reach drybox for Cellphones, iPods, GPS, etc.

The FS128T includes deep trays along the sides of the vessel. These trays are great for storing lures, tackle, and various other fishing accessories. Pictured here is a view of the cockpit storage, cupholders, and scupper plugs.

The foot pegs can be adjusted for anglers between 52? up to 62?. The Ascend FS128T includes scupper plugs and threaded-drain plug to allow for easy drainage after use. The bottom of the kayak has plenty of flat areas for mounting GPS transducers.