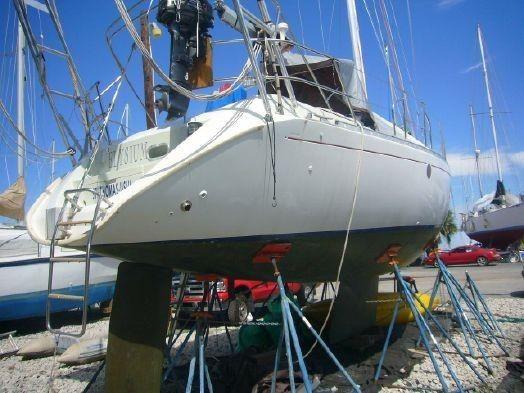 A ll systems are a definite "go" on this well-maintained example of the popular Moorings 38 by Beneteau. Since buying ELYSIUM in 2009, the current owner has done nothing but update the boat with all manner of equipment, including the addition of a new Yanmar diesel engine and transmission. Today, you would be hard-pressed to find a system aboard ELYSIUM that hasn't been inspected, tested, and proven by an owner who has twice sailed her to the Caribbean and as far north as the Hudson River to Lake Erie. Buy ELYSIUM and you'll be able to cross off a long list of projects from your likely "to do" list -- everything from new bronze thru hull fittings with new ball cock valves to a new dripless shaft seal to new pedestal steering chain to a new anchor windlass. And that's just for starters (see this listing's FULL SPECS). The improvements include a new stern arch, solar panel, Coppercoat anti-fouling over eight coats of West System epoxy barrier coat, new electrical wiring and even a West Marine Compact RIB. If your goal is to find a boat that you can leave on next week, look no more; ELYSIUM is ready.

–  The main salon, following the forward cabin, provides ample space for entertaining below decks. Settees on both sides can double as good sea berths, and a beefy drop-leaf table offers plenty of room for dining. The nav station is to starboard and doubles as the refrigeration, followed by the salon head, which is forward facing. ELYSIUM was built with two head compartments, with the larger and more spacious one being aft, to starboard of the companionway. Her forward head is used for storage at the moment, but can easily be converted back to its original purpose. The sink and shower still function but the head is disconnected from the holding tank. The aft head and shower is fully functional, and connected.
–  New LED interior lights (2013)
–  Headliner replaced (1997)
–  Mattresses replaced (2000)
–  New Shurflo shower controls in both heads (2010)
–  New shower drain pump (2013)
–  New fresh water pump (2013)
–  New fresh water manifold and valves (2013)
–  New bilge pump and new spare bilge pump (2015)
–  All new head hoses (2010)
–  New vinyl bulkhead liner (2010)
–  Extra 30-gallon bow bladder for potable water (new 2013)
–  Re-bedded all bulkhead ports (2010)