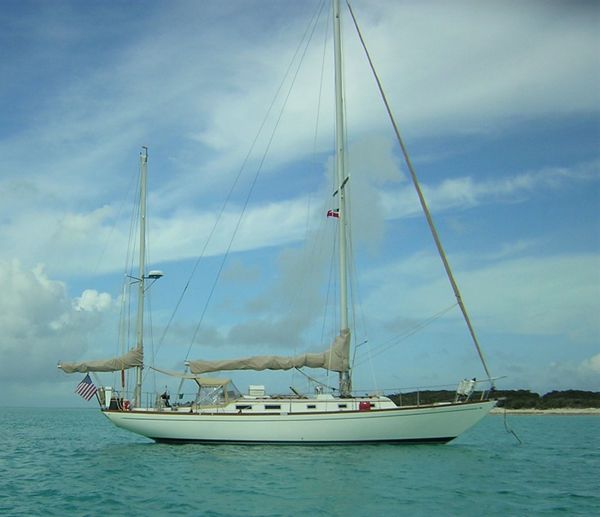 expand to see all 36 thumbnails

See all inventory from this seller (290)

"MEMORY" is a Block Island 40' William Tripp, Jr. designed yawl rigged, twin masted, blue water cruiser. She is equipped with a centerboard so you can reduce her deep draft down to 4' 10" minimum for shallow water anchorages. She has been sitting for over a year and is now ready to be sold to her new owner. The price has been reduced from $85,000 to allow for upgrades and refurbishment to bring her back to full glory. Offered as is, subject to your in-slip inspections. Offers encouraged.

Comment: some rubbing occurred on the starboard side rub and toe rails. The traveler was smartly redesigned and relocated out of the cockpit for convenient operation.

Comment: Mainsheet traveler relocated out of cockpit and onto the cabin top which opens up the cockpit and eliminates stepping over the traveler rail.

Oral History of the Boat

MEMORY was purchased in July 2003. We kept her in a slip at the Municipal Yacht Harbor next to Southern Yacht Club until January 2004 when we took her to Islamorada in the Florida Keys. Rick had lived in the Keys.

MEMORY became our home when we visited the Keys. In late 2004, Rick was diagnosed with his first cancer, underwent treatment, and emerged in successful remission. At that time, we decided to pursue Rick’s long held dream to sail south and cruise the Caribbean. We spent time outfitting MEMORYfor blue water passages and living aboard for an extended period away from a marina’s power source.

Rick was a graduate of the Naval Academy where he learned to sail, he was a naval pilot and then a commercial airline pilot. His passion for sailing, navigating, and working on boats grew over time, and he became very accomplished at it. I knew I was in good hands.

Our adventure began in late 2005 when we departed Islamorada for our first stop in Bimini. The timing seemed good as it was just a few months post Hurricane Katrina, and the mess it caused in New Orleans. We island hopped all the way down from the Bahamas to Trinidad during the first year to keep MEMORY south of the usual Atlantic storm track during hurricane season. After that, we sailed and visited the Windward and Leeward islands at our leisure and made many friends along the way. Jolly Harbour, Antigua became our base for 2 years due to its central location in the island chain.

In 2007 we had the exciting experience of participating in the Antigua Classic Regatta. We later moved our base to Puerto Rico and returned to Islamorada in 2010. MEMORY continued to be our winter home in the Keys for another eight years. In 2018 MEMORY was moved to New Orleans and Rick’s cancer recurred. We had discussed taking her up the east coast to New England but circumstances prevented that. We had so many wonderful memories of our years and adventures on MEMORY I hope she can find a new owner who will be able to do the same.

Engine and generator hours are as of the date of the original listing and are a representation of what the listing broker is told by the owner and/or actual reading of the engine hour meters. The broker cannot guarantee the true hours. It is the responsibility of the purchaser and/or his agent to verify engine hours, warranties implied or otherwise and major overhauls as well as all other representations noted on the listing brochure.