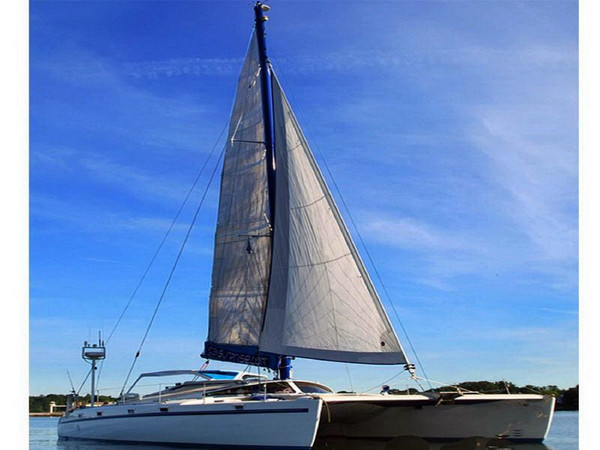 See all inventory from this seller (87)

See this stunning catamaran in person!

Chris White Designs catamarans are notorious for their innovative construction, well thought layouts and excellent speed, the owners have recorded speeds up to 17 knots.

This example is one of two Voyagers. It's striking sleek, futuristic styling is pleaseing and eye catching. These attributes are not only form, but function. One has to simply look at the profile at beam, one quarter and frontal to see the intelligence of this design. No need for troublesome dagger boards to make a cat sail well upwind. Reduce the windage, catamarans worst enemy, at all points. And in true Chris White style, make it beautiful!

Chris White Designs catamarans are not your typical cruising or charter cat, they appeal to the educated catamaran buyer who wants comfort, value and speed.

Major reduction makes this one of the best custom catamaran deals on the market! The owners want this boat sold now!!!

2 Heads, one each in port and starboard hulls. Each has stainless steel sinks with pressurized hot and cold water. Vanity with laminate tops and storage.

Outside hot/cold shower on port transom.

Large laminate counter on onboard side with two lockers below for tool and parts storage.

Lockers above for storage.

Three storage lockers on outboard side

12 volt dome and halogen reading lights in all working areas

FX-37 Fortress anchor with 150' of flat web type line that can be used as ground tackle and as jack line when on passages. Line is on a reel attached to the port side stern rail.

Self bailing locker for stowing chain and rode

One solar powered vent for refrigeration ventilation. Vents in engine room and in each shower

Two Cockpit side seats and one stern seat

Adjustable size cockpit table (can be removed for passages)

Two Balmar 150 amp high output alternators, one on each engine

Oil change pumps for each engine

All halyards and reefing lines are led to cockpit

In calm waters SURPRISE motors at 10 knots. In rougher waters, around 8 knots. She also sails as fast or faster in good winds. "We have had the boat up to 17 knots on a broad reach in 25 knots of wind on our way back from Bonaire. We did 1302 miles in 5 days 23 hours. On that trip we averaged 10.5 knots of speed for 6 days. We had two back to back 250 mile days and the next day was just short of 250. The winds were on our starboard quarter 28 to 32 knots with gsts of 40 knots. In normal conditions, winds 15-20 knots on the beam, she sails at 8-11 knots. In light winds we put up the spinnaker and sail a few knots more. She is a fast boat All this was done with full cruising gear aboard."

2011 Haulout and with bottom paint (August)