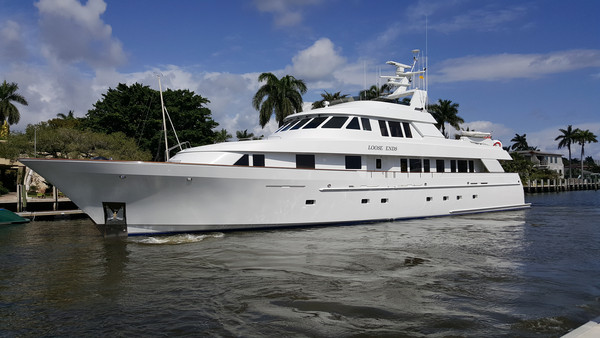 expand to see all 29 thumbnails

The 124' Delta motor yacht was an upgrade and evolution to the 122' Delta. With a higher bow and more fuel capacity, these yachts have proven to be capable ocean cruising vessels.

LOOSE ENDS, built as Scot Free, is the second vessel in the successful 124' series.

Having crossed the Atlantic six different times (with the aid of bladder tanks), she is a testament to the quality and stout build of a Delta motor yacht. LOOSE ENDS is equally at home in the Med as she is in the shoal waters of the Bahamas. Equipped with a hydraulic telescoping stern passerelle, shore power conversion unit, walk-around decks and plenty of outdoor space, she makes for an ideal cruising boat. The current owners enjoy the yacht with family and friends and also offer the yacht for charter.

LOOSE ENDS sleeps 8 owners and guests in 4 staterooms. Crew accommodations include 6 berths and 3 heads with a crew mess forward.

Upon entering the salon from the aft deck, or owners entrance starboard main deck, there is a large, bright interior, 7'2" headroom, large picture windows, and honey colored steamed beech woodwork with maple burl inlays. A formal bar is located aft starboard of the salon and a comfortable seating area to port and forward. A pop-up 42' television is starboard.

Forward and divided by a large storage banquette featuring graceful wooden columns, is the formal dining salon which features comfortable seating for 8, with additional space afforded by a leaf in the dining table. Easy access to the on-deck, eat-in galley is to port forward, with access to the day head and VIP stateroom to starboard forward.

The attractive open tread staircase amidship leads up to the sky lounge and down to the lower guest foyer. The foyer on the lower level leads to the full-beam king master forward with a full beam his and her head including a Jacuzzi tub and shower with magnificent Rojo Allicante marble walls, floor, and countertops.

A guest laundry is located in a closet in the foyer with a separate fire extinguishing system. On the main level is a VIP stateroom with a king berth. The VIP features an en-suite head with a marble lined stall shower.

Upon entering the main salon from the aft deck, there is an L-shaped bar with six chairs to starboard with an L-shaped seating area just forward and opposite. The bar has an icemaker, wine cooler, and refrigerator. There are two sofas and a recliner and 7'2" headroom throughout the vessel. The dining area is forward of the salon and provides ample seating for eight.

The full-beam master stateroom is forward amidship and offers a host of amenities, including a king berth, large walk-in closets, a settee and a complete entertainment system. The luxurious marble his and her heads are joined by a large Jacuzzi tub and shower. There is an escape hatch into the forward crew quarters behind a mirror on the port side of the master head.

The guest staterooms are mirror images, each comfortably appointed with steamed b eech woodwork with maple burl inlays and accents

Desk and credenza with entertainment system

The skylounge is accessed via the central staircase from the main salon. With teak paneling and teak and holly sole, the skylounge features large picture windows, perfect for relaxing and watching the views. There is an adjacent day head that services the skylounge.

The pilothouse is accessed forward from the skylounge and features a dinette area, ideal for underway cruising.

The outdoor dining area is located through aft double doors and guests can enjoy dining under a sun shade. There is a grill, 5-person hot tub, flybridge access, and access to the aft boat deck aft. The stairwell from the boat deck down to the aft deck makes crew movement between decks unobtrusive.

The foredeck is accessed via the teamed walk-around side decks, port and starboard. The foredeck features a built-in seating area, steps with safety rails onto the trunk-cabin, with a sun pad, and bosuns storage locker. Dual Anchors.

The transom features an integral teamed swim platform, with hot and cold shower, swim ladder, stainless steel cleats for tender, watertight transom door to the lazarette, and port and starboard stairwells up to the aft deck.

The aft deck is accessed from the centerline stern passerelle or via the built-in steps to port and starboard from the integral swim platform. The covered aft deck, with teak decking, comfortably seats 8 to 10 for dining.

All water and hydraulic lines and pumps replaced or rebuilt 2015

Computer with scanner and printer

Vessel is capable of plugging into shore power worldwide. A 3-cycle vessel is more efficient to run on shore power.

LOOSE ENDS is superbly designed for comfortable, relaxed cruising whether it's Alaska, the Caribbean, or the Med. LOOSE ENDS has made six trans-Atlantic crossings.

LOOSE ENDS went through a major refit in 2015

Portions of the superstructure and all inner bulwarks and flybridge hand-roll painted; 2008 and 2015

Repaired icemaker on the flybridge

Partial upgrade to NIA stabilizer system; all electronics were replaced with new; electronics are ready for zero-speed upgrade

Re-plated both windlasses and ship's bell

Installed wireless LAN access points throughout, including outside areas

Replaced or rebuilt all A/C compressors and air handlers

Replaced all extractor fans in the interior

Compounded and waxed entire vessel; May, 2015

Re-fiberglassed and painted both port and starboard rub rails

Built and installed new paddle board brackets on the starboard bow

Serviced and/or upgraded all safety equipment

Rebuilt all pumps in the engine room and lazarette

Made new harness to lift tender

Rebuilt all pumps and alternators on main engines

Rebuilt all pumps and alternators on both gen-sets

Cleaned and reorganized all ship's files

Replaced both water makers and piping with new

Serviced all A/C equipment in the engine room

Replaced sink fixtures on the flybridge and boat deck