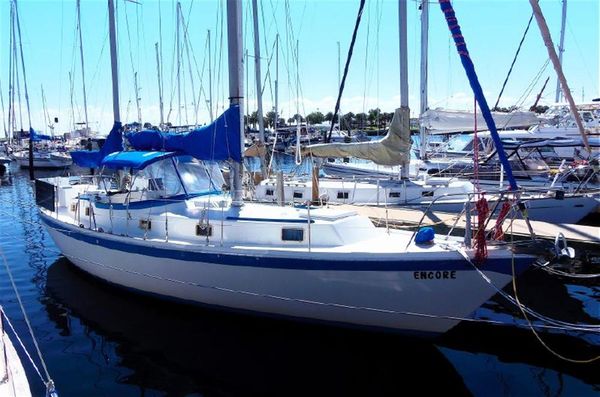 expand to see all 19 thumbnails

Encore has been extensively updated for extended cruising as follows:
2009 - New standing rigging and chain plates.

Additionally in 2011 Encore's Perkins engine and transmission were both rebuilt, with only 239 hours.

Accommodations
Encore has been updated with AC and heat.6'8" headroom in the main salon and galley.You enter the salon/galley area from the center cockpit.The settee is spacious and can seat up to 7 people comfortably. Plenty of storage is provided under the seating and to the sides of the hull with a book shelf and cupboards above the settee and a large cupboard next to the salon.

The galley is U shaped on port with propane stove, microwave, locker style refrigerator and lots of storage areas.

Moving forward is theheadwith double doors for privacy.Further forwardis a V-berth with stowage underneath and a hanging locker to starboard.

Movingaft from the salon throughthe passageway on starboard isthecaptains state room.The headis located behind the engine compartment. There is plenty of storage below theaft berthand large hanging lockersto starboard. The headhas avanity and hot/cold shower.

Galley
The U-shaped galley is a favorite amongst chef's, due to everything is at your fingertips. There is plenty of counter space, with an additional table that can extend beyond the stainless sink. As with a lot of cruisers you have a choice of water all discharging at the sink, either a manual salt water pump, Hot/cold with Culligan filtered water or the watermaker. The top loading icebox was upgraded with refrigeration. Along with the 3 burner Seaward stainless steel propane stove and oven, a microwave was added to help out with cooking.

Hull, Rigging and Sails
In 2009-12 "Encore", went through an extensive refit in preparation for some comfortable cruising with peace of mind added in for good measure.Gulfstars are renowned for their seaworthyness and make for great cruisers. So to continue in bringing her up to date her owners replaced or added:

– There were no blisters but for self assurance when the hull was repainted in 2011, a barrier coat was put on first and then 3 coats of bottom paint.

all integrated in nav display @ helm -

Entertainment is provided by:

Note: all the speakers are independently adjustable

Note that with a little rearranging of the engine compartment there is sufficient space to install a generator.

Brokers comments
Encore has been meticulously brought up to date with today's standards of cruising. Her owners have chosen a quiet means of recharging her batteries for long peaceful stays in scenic coves. With the extensive refit and attention to safety in new navigation equipment, she will provide peace of mind combined with low maintenance to give many years of enjoyment to her future owners.

Encore's interior shows well and she is air conditioned. She is a dry boat a nd ready for cruising to your favorite destination. Her current slip is transferable and the marina is live-a-board friendly.

Encore is ready for a Bahamas cruise or a live-a-board in downtown St. Petersburg!