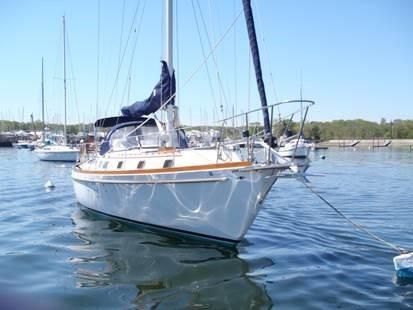 expand to see all 55 thumbnails

Opportunity to acquire a timeless good looking classic with engine, generator, AC, Heat, refrigeration and other replacements/upgrades. Very well equipped example of the rare two cabin owners version. This is a superb value if you are willing to spend time on mast and topside blisters in painted areas above waterline.

–  The spars and mainsail were submerged in salt water while stored on land, need to be inspected and refurbished as needed. The radar dome on mast was also submerged. Stainless rigging and chainplates had been replaced by the previous owner.
–  There are blisters in the mid-ships topside paint areas. The topsides were painted in 2012 and the boat was immediately shrink wrapped and stored on-the-hard. The blisters were discovered when the shrink wrap was removed earlier this year. They were likely caused by moisture trapped between the shrink wrap and the hull.
–  The Boat has been shrink wrapped and stored for over five years and the systems have not been used. Before being stored everything functioned properly.

Albatros has never been in charter and was lightly used. In fact, she was in storage in the northeast for approximately twelve years before her previous owner purchased her and did a major refit. The refit included full refurbishment of the engine compartment, a new (2008) 110 HP Yanmar turbo diesel and a new Fischer Panda generator. Also part of the refit were new electronics, new Hood stainless steel hatches, new stainless-steel opening ports, installation of a 3-zone A/C, Espar heat, refrigeration and other equipment noted in equipment section. The headliner was also replaced, and the interior wood work and sole reconditioned.

Albatros was relocated to Savannah from Huntington, NY in 2012 by her current owner who is a yacht design professional. He hoped to liveaboard her but was relocated for work. In 2012, she was hauled out, the spars were removed, and the topsides were painted. Following the paint job, she was shrink wrapped and stored on-the-hard. During a flooding event at the yard, her spars were submerged in salt water. Before discovering the blisters, the owner planned on re-commissioning the boat and having the spars reconditioned to sell her. Due to owner time constraints the boat is being offered for sale in AS-IS condition at a discounted price.

Some of the photos of Albatros in the water were taken in 2012. All other topside photos in the yard on the hard and interior photos are current.

You will be impressed by the condition of Albatros interior. The high-quality teak joinery and cabin sole are in excellent condition with updates (ie ports 2008, hatches 2008, upholstery 2005 headliner 2005) and subsequent minimal use have kept Albatros looking current.

Beginning forward, the Guest Cabin has a double V-berth with a filler cushion. There are two opening stainless steel ports and a very large deck hatch providing natural light and ventilation. The cabin also has an air conditioning vent and control for added comfort. There is above average storage with two hanging lockers and six drawers.

Aft of the guest cabin on the port side, is a large Guest Head with shower, vanity, sink and an opening port. It is accessible from both the salon and the guest cabin. There is another large hanging locker adjacent to the guest head on the starboard side.

This two-cabin owners version features a large L-shaped Navigation Station aft of the salon on the starboard side with an adjacent large 5 foot high hanging locker ideal for foul weather gear. The nav station has a swivel chair, a large drawer, a cabinet, and shelves. The removable ladder next to the Navigation Station provides the forward access area to the extra large engine room. There is a door with inspection window for aft access to the engine room across from the stove/oven.

The large L-shaped Galley is aft of the salon on the port-side. It is equipped with a double S/S sink, an S/S dishwasher, a Crosby cold-plate refrigeration system and a Force 10 stove/oven with a ceramic cooktop. There are two large storage pantries, three drawers, and cabinets that run the length of the galley.

The large Engine Room is accessible via a large door under the companion-way ladder and a door in the passageway between the galley and the owners cabin. The primary AC and DC electrical panels and the generator controls are located in the passageway as well.

The aft Owners Stateroom features an en suite head with standup stall shower, a massive U-shaped berth and plenty of storage with 7 drawers and hanging locker. There is maximum amounts of light and ventilation with 5 ports and a very large overhead hatch.

Electronics Navigation include the following which have been replaced in the timeframe noted:

The hull of this Gulfstar 50 is solid, hand laid fiberglass. The bottom was barrier coated by previous owner and there is no evidence of blisters. There is a full length rub-strake constructed of teak and stainless steel.

The content of this listing, including photographs, are the property of SJ Yachts and shall not be reproduced or published without the express written consent of SJ Yachts.