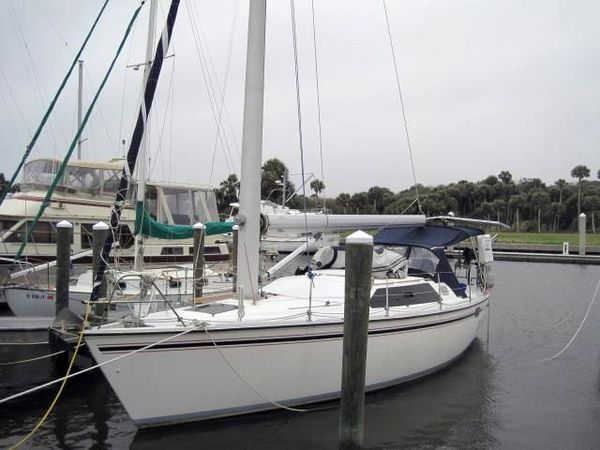 See all inventory from this seller (126)

Here's an affordable and roomy, really well equipped and continuously upgraded cruiser that invites you to to slip the dock lines and go sailing at a moment's notice..

Ease of sailing is the hallmark of this Hunter Vision 32. Between her unstayed mast, in boom furling, uncluttered side decks and walk thru transom, nothing could be simpler to handle than ANOU-II. Down below, there's a panoramic interior, thanks to an open floorplan that maximizes living space. ANOU-II is loaded with gear, including a new bimini and dodger, folding wheel, electric windlass, autopilot, solar panels, and a dinghy and outboard with davits.

Accommodations
In designing the Vision series, Hunter took an open approach to the layout of the interior. Further enhancing this feeling are expansive wrap-around windows. A V-berth forward is separated from the salon by curtains that can be pulled back when the area is not in use. Instead of having two settees opposite each other, as in traditional designs, the salon settee runs continuously from one side to the other to encourage lounging. Rather than intrude into the salon at the foot of the companionway, the galley runs along the port side of the boat, with the refrigeration cleverly situated on centerline to do double duty as both a place to lean against when cooking in a seaway and an extension of the galley work area. Opposite and to starboard is a large head and shower compartment. There's also a spacious aft cabin to port, just aft of the galley.