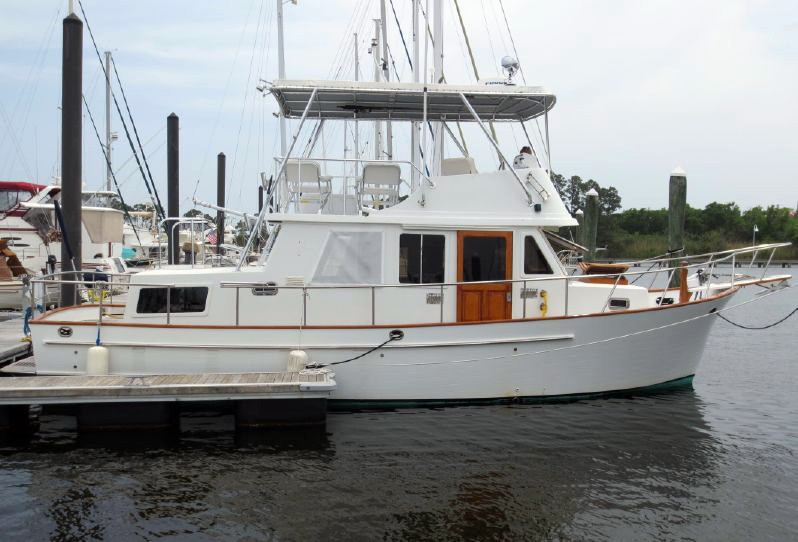 expand to see all 79 thumbnails

See all inventory from this seller (104)

No Disappointments. Ol' Snipe Has Been Completely Renovated!

Be sure to watch the custom walk through video.

Vessel Walkthrough
There are two entrances to the Marine Trader 36. There is a main entrance on the starboard side of the salon midship, and a private entrance to the master stateroom via the aft deck.

Entering from the main sliding teak door, you enter the main salon. The teak parquet floors are in great shape throughout the yacht. The main salon has a newer L-shaped Ultrasuede settee with folding cocktail table. Opposing the main settee in the starboard corner is a well-appointed galley with plenty of counter space and storage.

Walking forward from the main salon through another sliding privacy door gains access to the guest stateroom forward. The guest stateroom features a large v-berth, and another head that has just recently been renovated. There is plenty of storage in hanging lockers and drawers, and separate AC controls.

The flying bridge is accessed via a custom stainless ladder from the aft deck. The flybridge is very spacious and wide open. There is room for several folding chairs and a table if desired. The helm offers an upholstered pedestal style seat, with bench seating to port. A large 10" Furuno multifunction display is front and center as is upgraded hydraulic steering.

Galley
The comfortable galley shares its space with the main salon. There is plenty of counter space and storage.

The master stateroom features a large double berth with ladder leading up to the private entrance. There is also a decent sized head with separate shower, and a large desk/ office area to port.

The guest stateroom features a large v-berth with plently of storage over and under. There is a beautiful teak butterfly hatch overhead. There is also a private head that has just recently been renovated.

Flying Bridge
The large flybridge is a wide open space with plenty of room for chairs and tables. The upper helm station has been completely modernized with a custom fiberglass helm station and all new electronics. All new hydraulic steering was also added during the renovation period.

Brokers Remarks
If you look closely at the full specs of this vessel you will be blown away. Almost every piece of electrical, mechanical, plumbing, hull, deck, flybridge and electronics has been replaced or renewed. It is hard to completely grasp everything that has been done in the past 5 years, and I am sure I am missing many of the smaller details.

You simply must see this boat in person to completely appreciate it.

Well used and usually poor condition trunk cabin trawlers are very common in the marketplace. Finding one that is in fantastic condition can sometimes seem impossible. Ol' snipe has the classic great looks without the issues so many other classic trawlers have. All of the work has already been done for you.

This Marine Trader is simply gorgeous. Between 2007-2015 Ol' Snipe received an almost complete restoration by a professional craftsman and attentive owner. Almost every system has been upgraded. She is clean, well appointed and extensively upgraded.

She is ready to go today. Watch the walkthrough video and see for yourself. Act quickly, because trawlers that are in this condition usually won't last long.

The list of renovations is extensive, but you can see some highlights listed below.