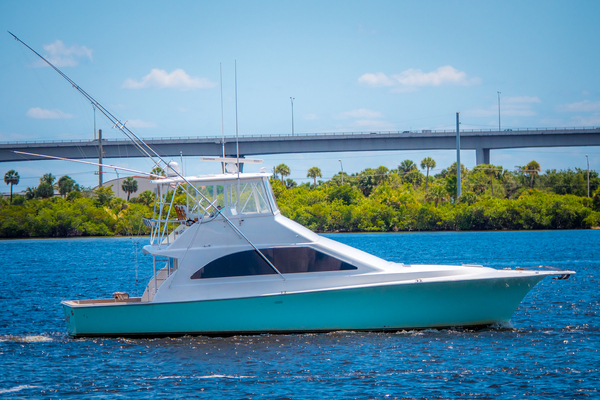 expand to see all 30 thumbnails

CHARIS is a three stateroom, two head, 48 Ocean Super Sport that has been completely updated, including her exterior, mechanical systems and her interior. She is Turn-Key ready with rich custom sportfish yacht features. The entire interior has been refit along with her electronics and countless other items (see list), including a top-end rebuild (2009/2010) on both engines and a new generator(2012). The owner has had an open checkbook on this boat since he purchased her and has kept impeccable detailed log books and maintenance records to back it all up.

Sleeps eight with owners and guests in three Staterooms. The large Salon includes an L-shaped lounge to port and a u-shaped Galley port forward with a Dinette settee starboard forward. Each settee can sleep one. There is a Master Head with shower and a Guest Head with shower.

2012 Refinish of all Cabinetry in Vessel

2013 All Windows Retinted against UV

2012 Upgraded all Facets and Fixtures in Galley and Heads

All the living areas are on the same main deck level. The Galley is U-shaped to port and has a Corian counter with recessed cook-top, four under counter Sub Zero refrigerators/freezers,built-in microwave and a plethora of storage. The large Dinette is to starboard and features a wraparound settee and occasional stool. The entertainment center is on the forward bulk head and features a Bose Lifestyle 321 system with an upgraded Samsung flat screen TV tied into the ships Satellite TV system. There is a starboard side wet bar with a 12 bottle wine cooler, sink and Puma Pub dispenser. The main living area of the Salon has a large L-shaped settee with storage under and a High Low table. There is new custom carpeting throughout the boat. This vessel shows has a rich feel of elegance.

The Salon is laid out with a large L-shaped sofa to port as you enter the yacht. The outboard side of the sofa has rod and gaff storage below. A high gloss teak High-Low table lies in front of the sofa. To starboard upon entering the cabin, is a drawer and the yacht's electric locker below, followed by two teak bi-fold doors with shelves and storage within. Next, forward is a round bar sink featuring a liquor dispenser. The cabinet below has bottle storage and a small drawer. An Edgestar wine fridge is forward. An L-shaped Dinette with high gloss Teak table, stool and storage below the cushions is forward to starboard. The yachts updated entertainment center is above, featuring a Samsung Flat Screen TV, Bose 321 Lifestyle system and Bose speakers, all tied to a KVH Trac Vision satellite TV system. Also in this area are 15 LED Lights, digital Cruisair SMX AC controls, Bali Sky Shades on all windows, telephone outlets, table lamps, high end custom carpet and ample loose pillows.

The Master Stateroom is amidship to port and has a Queen-size berth with an upholstered headboard and an angled mirror above. Below the berth are two drawers inboard and three drawers at the foot of the berth. Inboard is a nightstand with a cabinet below. To port are three storage cabinets and a hinged panel housing a Samsung Flat screen TV. Next, forward is a full size cedar lined, lighted hanging locker with a shelf within. Above are five LED dimmable mini spot lights. This stateroom also has the Cruisair SMX online digital AC controls for the accommodations, and private access to the Master Head.

Located port side forward of the Master Stateroom. The Master head has a large glass enclosed shower, Vacuflush head, plenty of storage and a Corian vanity.

On centerline is the pedestal berth with three drawers below accessed from the foot of the berth. Above the berth is an upholstered panel and a mirrored hatch to the rope and chain locker. To both port and starboard are three cabinet doors with storage within. The aft cabinet on the starboard side houses a Samsung Flat Screen TV. Above is an escape hatch with screen and four dimmable mini LED spot lights. To both port and starboard are lighted cedar lined hanging lockers. The access to the head is aft and to starboard.

Accessed from both the VIP and the centerline companionway is the Guest Head. The sole is Amtico teak and holly. The Vanity top is Corian with a molded sink and two cabinets in the Formica vanity below. Above are two mirrored medicine cabinet doors with three shelves within. The stall shower has a curved clear acrylic door, a hand held or wall mountable fixture, a light, an exhaust fan and a small ledge for storage. The toilet is a Vacuflush model. Above is a mirrored ceiling, two LED mini spot lights and a small frosted opening Bomar hatch.

The optional third Stateroom is surprisingly roomy and offers a great deal of storage. The berth is athwart ships and has twin brass reading lamps. There is a lighted cedar hanging locker that is exceptionally large. Below are six drawers and two cabinets for shoes.

The Guest/Day head has private access from the forward Guest Stateroom and the companionway. Full enclosed shower, Vacuflush head and a Corian sink and vanity.

Bench seating port side of console

Surround Sound on Fly Bridge can source directly in TV Video on the 7125 screens which makes it great for watching Sunday football while out fishing!

Turbos were blueprinted and completely rebuilt

Detailed receipts and records all catalogued on board

After taking a close look at an Ocean 48 Super Sport, its easy to understand why more than 400 were built. Jack Leek founded Ocean Yachts in 1977. Since then, three generations of Leeks have assembled yachts in the companys South Jersey plant. The 48 Super Sport is high on the leader board of the success stories produced over three-plus decades. The longevity of her appeal is derived from her one-two punch of sleek looksboth inside and outand sound performance. From 1986 through 2003 the 48SS had one makeover and one major redesign. Combined, more than 400 hulls were produced. By numbers alone she makes a presence on the used market, but her popularity goes much deeper than simply volume. The original 48 was an adaptation of the popular 46 Super Sport, says John Leek IV, Oceans General Manager. We learned a lot from those owners. The 46SS offered a two and three stateroom layout, and the 48 improved upon that with greater interior volume and a more contemporary style. Well-known marine architect Dave Martin designed the 48. The original 48SS offered a two or three-stateroom layout. The two-cabin version was a galley-down arrangement. Ocean Yachts strong following consists of both anglers and serious cruisers. Most buyers on both sides of the fence were looking for the third stateroom on a vessel of this size. When the 48SS was introduced, Ocean was ahead of its time as far as amenities, continues Leek. "
The 48-footer had a custom boat look and the Teak added to the appeal for the hardcore fisherman. The families, spouses in particular, approved of the interior.

Owners personal items and all fishing equipment that was not part of the original build.

The minimal deadrise design at the transom pops the Super Sport out of the hole with ease. Once at cruise, it’s as efficient as they come. It sits well beam-to and the modified-V takes most seas comfortably. A big head sea will initiate a pull back of the throttles, just the nature of the beast.Broker Comments

CHARIS is everything a pre-owned Sportfish buyer could hope for. Updated with class, the right Color schemes and an interior that would rival any custom build, CHARIS is a must see. With her updated electronics, detailed log books, an engine room that sparkles, one need not look any further for a great turn-key refit boat. This is the boat everyone dreams about when purchasing a pre-owned vessel. Many talk about updating their vessels; this one, nuts to bolts is ready for her new owner.

Engine hours are as of the date of the original listing and are a representation of what the listing broker is told by the owner and/or actual reading of the engine hour meters. The broker cannot guarantee the true hours. It is the responsibility of the purchaser and/or his agent to verify engine hours, warranties implied or otherwise and major overhauls as well as all other representations noted on the listing brochure.