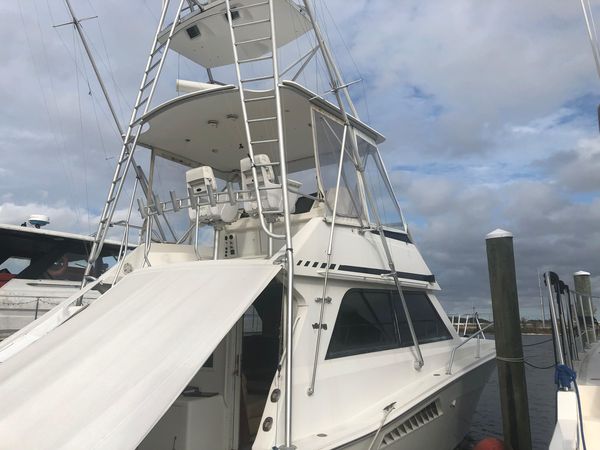 expand to see all 55 thumbnails

Coupesetique is fitted out as Model B with a two-stateroom layout featuring a mid-level galley wide open to the salon and a very spacious master stateroom/head compartment Topside, the flybridge is among the largest in her class and features a particularly well-arranged wraparound helm console. The cockpit includes a transom door,tournament fighting chair,molded tackle center, in-deck fish box, and direct engine room access. A custom tuna tower with an upper helm was added in 2004.

Master stateroom is forward with island king bunk. Stowage under and a set of drawers on the aft end. Carped sole. Cedar closet on the starboard side, shelving closet on the port side. 12VDC and 120VAC lighting. Overhead hatch. Mirror on theforward bulkhead.

Next aft, on the port side, is bunk stateroom and the head is on the starboard side with dual access.

Next aft is the galley, down, on the starboard side. The saloon is up and aft.

U-shaped galley is down, to starboard, forward of the main salon. Teak cabinetry and linoleum tile sole. Hatch in the sole for the water pump, water heater, and storage.

Dual entry head on starboard side aft of theforward stateroom. Inset sink in countertop with mirror above and drawers below and walk-in shower stall.

Countertop across the forward end of the cockpit, with refrigerator, sink, and storage lockers.

Main engine room entry in center of the counter.

S/s ladder on the port side for flybridge access.

Transom door on starboard side.

Shore power cord entry on the port side forward.

Water wash down panel on the starboard side forward, under bulwark.

Flybridge access ladder from the cockpit on the port side.

Helm console offset to starboard with helm amidships. The console has dual throttles and dual shifters, instrument console, as well as SSB and VHF radio.

RPM. Mounted athwartships in after portion of the port side of the engine room