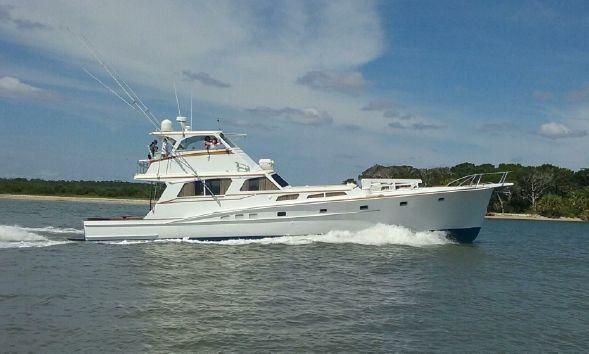 Miss Phebe II has "great lines and great story lines," says her current owner. She is, without a doubt, a special boat. Whether you want to fish, play with dolphins, cruise the islands and beyond, or simply own a magnificent piece of history, this is the boat for you.

Built in 1971 by Whiticar Boat Works in Stuart, FL, of solid mahogany construction, she spent the first half of her life in Nashville, Tennessee. E. Bronson Ingram II, well-known billionaire and business investor, commissioned her new for 2.5 million, and it took Whiticar Boat works 2.5 years to build her. She was one of the famous Shearwater custom sport fishing boats designed and built by Curt Whiticar, and she has been featured in many magazines for her beauty, elegance, performance, and story.

Her current owner is an active conservationist, and has dedicated quite a bit of his time aboard her to aiding in various marine research projects. She is the a member of the SeaKeepers DISCOVERY fleet, and has engaged in tiger shark tagging in the Bahamas, marine algae and coral research, whale shark research, dolphin research, and much more. Some of the most prestigious conservation groups, including the Cousteau Society, Mote Marine, the Rosensteil School of Marine Science of the University of Miami, have worked aboard her.

In 2012, a research cruise to the Dry Tortugas onboard Miss Phebe was the first ever SeaKeepers DISCOVERY Yachts mission, providing scientists with the opportunity to collect hundreds of coral tissue samples which were used to study coral genetics and better understand the differences among coral communities.

She has an extensive fishing background, and has been to Belize and many other exotic locations. Marlin Magazine's Ricard Gibson happened to be aboard her as an observer during a fishing tournament in the Turks Caicos during the 90's when a large blue marlin rammed into the starboard side of the boat below the gunwhale and lost its spike in the mahogany. The spike still remains affixed to the hull and can be seen from inside the engine room (see final photo in gallery!).

Be sure to watch both of the videos in the listing--the first one shows an account of some of the wonderful times that have been had in the Bahamas aboard her, and the second shows her Detroit Diesels running beautifully (taken in June 2018).

Of course, she is much more than the sum of her stories. One could listen to stories and read about her forever, but what about getting out on the water? She's located in Marineland, Florida (an easy drive from the Orlando or Jacksonville airports), where she is kept in the water, maintained by a professional captain, and run regularly. She is equipped with modern safety gear, including a new life raft, and is comfortably appointed for up to 8 people to sleep aboard, each in their own private berth. Her galley is perfect for preparing seafood dinners, and her salon is perfect for entertaining. She has new air conditioning units, and industrial sized icemaker, a wet bar and fridge in the salon, a large cockpit and bridge area, a massive forward deck where you can sunbathe, a new anchor and top-of-the-line windlass, and more. Read on for details!