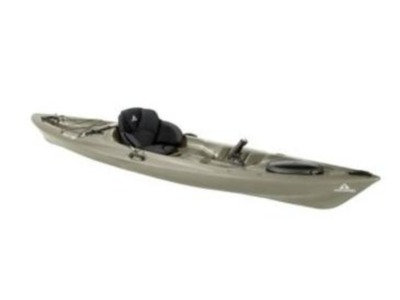 The Ascend FS10 Sit-In Fishing Kayak is the ideal boat for fisherman who like to be close to the action. The FS10 comes ready to hit the water and start catching fish!

The Ascend FS10 Fishing Kayak is jammed with amazing features for kayak fishermen. This kayak comes fully loaded and ready for the water. Just add your rod, reels, and tackle box.

The Ascend FS10 Kayak has been designed for ultimate maneuverability, tracking, and stability. The kayak features a state-of-the-art allows for for a quick paddle when you need to reach your favorite honey-hole quickly.

The state of the art DLX seating system is fully-adjustable to reach the proper height. The stainless-steel seat is also removable for use outside of the kayak.

The front mounted dry storage hatch is a great place to stash Cellphones, iPods, Cameras and other items you need to keep dry and handy. The rear deck features two custom flush-mounted rod holders within easy reach of the cockpit. While the front features an adjustable rod holder for getting the perfect angle.